Mahesh and Allu Arjun for another war

Is this why NTR, Mahesh rejected Gona Ganna Reddy

Who is Mokshagna’s debut director?

Vijay Devarkonda speaks his heart out 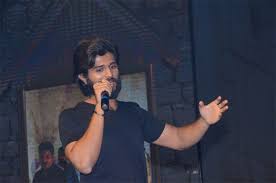 Dorasani, a periodic movie set in Telangana backdrop is all set to release on July 12.
The movie marks the debut of Anand Devarakonda and Shivatmika Rajasekhar, directed by debutant KVR Mahendra, presented by Suresh Babu and bankrolled by Madhura Sridhar and Yash Rangineni, had its pre-release event last night.

Vijay Deverakonda was moved to tears as he recollected his bond with his brother Anand Deverakonda. He revealed that he stopped talking to his brother when he told him that he quit his job in the US and decided to act in movies, “I didn’t like Anand’s decision and told him that acting is not an easy job. Since that day I didn’t inquire about how Dorasaani was progressing. I just watched the film before coming to the event and I must say, the entire team has made me proud. Also, I pursued my acting dream only because of Anand and his financial support.”

Mahesh and Allu Arjun for another war

Mega Star Chiranjeevi's meeting in his house with industry celebrities and his subsequent visit to meet CM KCR triggered a huge controversy with Natasimha...
Read more

Is this why NTR, Mahesh rejected Gona Ganna Reddy

Who is Mokshagna’s debut director?

For long Natasimha Balakrishna's son, Mokshagna's debut became a talking point. However, with rumors spreading that Mokshagna informing his dad Balakrishna that he is...
Read more